The over-representation of children from out-of-home care in our criminal justice system is of long-standing concern to Victoria Legal Aid. Read about findings from our Care not Custody report.

Children placed in out-of-home care (OOHC) are some of the most vulnerable and disadvantaged in the community. Many have been exposed to multiple traumas from a young age due to family violence, substance abuse, neglect or abandonment, and sexual or physical abuse.

Numerous studies have shown that despite being removed from unsafe environments, once placed in OOHC, too many of these children become unnecessarily involved in our criminal justice system.

Since 2016 we have been advocating for a new approach to reduce the contact kids in OOHC have with the criminal justice system. We found that more than one in three of our clients aged 11–17 who are placed in out-of-home care require help with a criminal matter. Read our report Care not custody: A new approach to keep kids in residential care out of the criminal justice system.

Partly due to this advocacy, the Victorian Government has announced a new plan to reduce young people’s contact with police and their entry into the court system. The plan acknowledges the need for therapeutic approaches when supporting young people in residential care (a form of out of home care – usually a unit with paid staff). It also states that criminal charges should not be pursued if there are viable alternatives. We welcome this new approach to vulnerable children and look forward to being part of the implementation group. 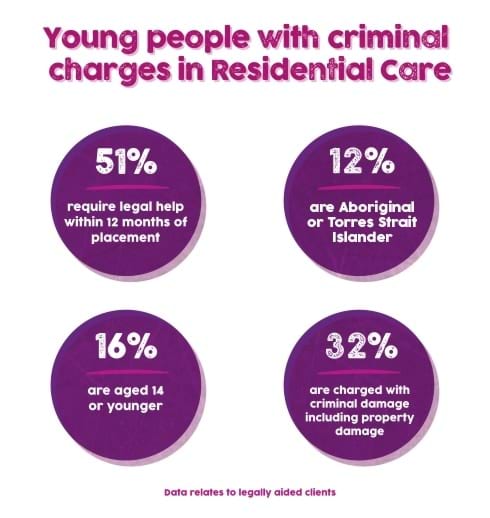 Children placed in residential care are at least three times more likely to require legal help for criminal charges as children in all other placement types (in OOHC or when the child remained with the family).

Of children we assist with a child protection matter who are placed in residential care, our most recent data (from the 2018/2019 financial year) indicates:

This builds on the evidence from 2016 which showed that:

Towards a better system – the new framework

Informed by our clients’ experiences, since 2016 we have called on the state government to adopt a new approach, similar to Queensland and New South Wales, which explicitly aims to reduce children’s contact with police.

The new framework emphasises the importance of trauma-informed approaches to working with young people. It provides decision-making guidance for residential care workers to avoid calling police for low-level incidents. Importantly, it states that charges won’t be pursued where there are viable alternatives. We are pleased to support the new framework and look forward to driving change through our role in the implementation group.

Read our May 2017 press release to learn more about responses to this research.

Read Care not Custody fact sheet from a September 2018 data analysis of our child protection clients.

Read the Framework to reduce the criminalisation of children in residential care.

For more information about this report, to get involved in this project or share your experience with us confidentially, please contact Olivia Greenwell, Manager of Strategy Family Youth and Children’s Law via olivia.greenwell@vla.vic.gov.au or (03) 9280 3701.

Disclaimer: The material in this print-out relates to the law as it applies in the state of Victoria. It is intended as a general guide only. Readers should not act on the basis of any material in this print-out without getting legal advice about their own particular situations. Victoria Legal Aid disclaims any liability howsoever caused to any person in respect of any action taken in reliance on the contents of the publication.

We help Victorians with their legal problems and represent those who need it most. Find legal answers, chat with us online, or call us. You can speak to us in English or ask for an interpreter. You can also find more legal information at www.legalaid.vic.gov.au